What does 'Assumed Datum' mean?

National Hydrological Services often reports the water level (i.e. the Gauge Height) above an assumed datum (also called an assumed reference system). An assumed datum is an arbitrary local coordinate system. In the diagram below, the 'Gauge Reading' indicates the level of the water above the assumed datum and does not reflect the 'depth' of the water, nor its height above sea level. 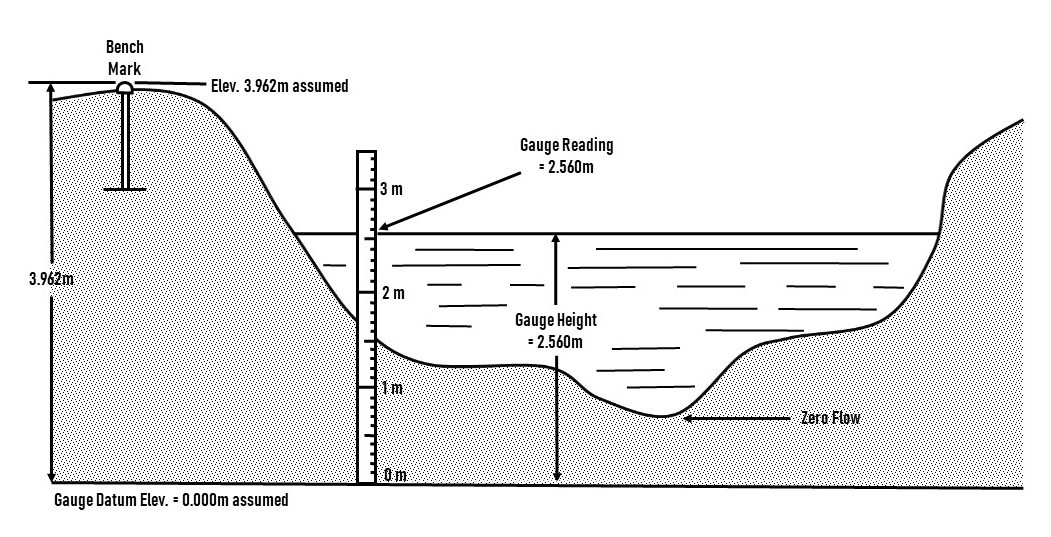 Which datum does "GEODETIC SURVEY OF CANADA DATUM" refer to?

Generally, the National Hydrological Services convention is that "GEODETIC SURVEY OF CANADA DATUM" refers to "Canadian Geodetic Datum of 1928 - CGVD28". Existing conversions associated with "GEODETIC SURVEY OF CANADA DATUM" are now dated and imprecise in absolute space. Regardless, stations that are operated in this datum still maintain high precision in local relative space, similar to what is done with an assumed datum.

Historically, attempts were made to update datums on an annual basis and rename them with the year the update was conducted. "LOCAL YEAR X ADJ." therefore indicates the year the station was last connected to a national benchmark. Although the need for these updates is real, the ability to do so before Global Navigation Satellite Systems was inconsistent. Existing conversions with local adjustments are now dated and imprecise in absolute space. Regardless, stations that are operated in these datums still maintain high precision in local relative space, similar to what is done with an assumed datum.

How do I convert data to other datums?

Users can convert National Hydrological Service's hydrometric products through Natural Resources Canada's (NRCan) tools and services listed below. Note that where a station operates on an assumed datum and has no other conversion available, the use of these tools is not possible.

What is the effective date of CGVD2013e2010 conversions?

CGVD2013e2010 does not have an effective date. Once in existence, any datum can be used to express any data set at any time the user chooses. Geodetic datums have differing levels of uncertainty depending on how they were created, their resolution, their age and the associated error.

What we are doing

Feedback about this web site